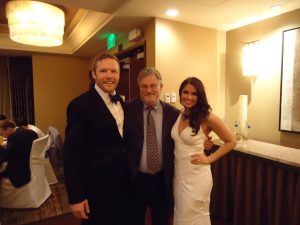 If given a choice, who would you prefer to have officiate at your Jewish wedding: a secular Jewish celebrity or a rabbi?

Couples who identify themselves as “not religious” or “secular” and view the wedding ceremony merely as a prelude to the social festivities would probably chose Larry David.

To paraphrase Jerry Seinfeld, “there is nothing wrong” with being a secular Jew.

“Rabbi” Larry David as the officiant would guarantee that one’s wedding would be viewed by millions on YouTube.  Instead of chanting the seven wedding blessings, Rabbi Larry David could share with the couple the seven most Jewish moments on Curb Your Enthusiasm.  He would replace prayers with shtick.

Of course, Rabbi Larry David would probably not want the couple to drink from the same kiddush cup because of his concern with spreading germs.  He also might be opposed to the breaking of the glass at the end of the ceremony due to fear of flying glass shards.  But who cares so long as he is funny and extremely neurotic.

I completely understand why many Jews would chose Larry David.

However, what would the couple miss if Larry David is their wedding officiant? Rabbi Larry David would not mention the word “God.”  He would not recognize the fact that the wedding ceremony is one of the most spiritual moments a couple will ever experience together.  He would be more interested in entertaining people than inspiring the couple to live a blessed life.

Rabbi Larry David may make the couple laugh, but he would not bring tears of joy in their eyes.