How Many Jokes Should a Rabbi Tell at a Jewish Wedding? 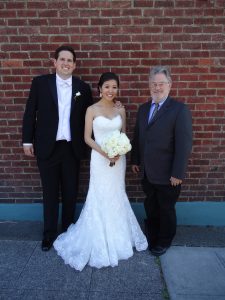 Some laughter is great at a wedding ceremony. Laughter is entertaining and makes people smile.  Besides, a wedding is not a funeral and people are encouraged to enjoy themselves during the wedding.

Rabbis should not focus their energy on getting laughs from the audience.   Rabbis should be primarily concerned with creating a spiritual experience for the couple in which they express their love and devotion to each other.

Mobilerabbi is committed to creating a meaningful and poignant Jewish moment for the couple during the wedding ceremony.  Excessive laughter is only appropriate for the party after the ceremony.

However, if you know of some very funny jokes that are appropriate for a Jewish wedding ceremony, please forward them to mobilerabbi.  It doesn’t hurt to tell one or two funny jokes during the ceremony…or perhaps three.